For decades Paul Gioia performed a unique mix of pumped up blues and gospel piano, as well as accordion and hammond organ. With a background steeped in blues and jazz, Paul has performed in a number of solo, duet and band configurations, including Tin Dog and the Paul Gioia Trio. His most recent band featured Greg Brenton on drums and Joe Southwell on bass.

Paul plays with an infectious passion and sensitivity and has earned a reputation in Western Australia for his blues keyboard prowess.

Paul performed in most major Western Australian festivals. Motivated by his observation that piano is rarely featured as a roots instrument, Paul developed a highly successful repertoire incorporating Chicago and New Orleans blues, country blues, jazz, ragtime, soulful ballads, black and white southern gospel traditions and even a foray into tasteful and exquisite arrangements of traditional Celtic tunes. This unique repertoire meant his gigs were consistently a hit with audiences.

In 2004 Paul was awarded an ArtsWA grant to record a selection of that repertoire, with the aim of featuring piano as part of our roots music heritage. Mercy Train, engineered and co-produced by James Hewgill, was released in March, 2005. 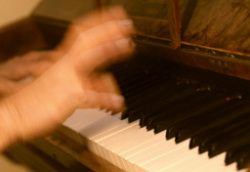 More recently Paul released his latest CD, Blue Sky, in 2012. Regarded as his best CD yet, Paul had the privilege of playing with his two sons Andrew and David, and Bruce Thompson on horns, Kris Kingwell and Chelsea Gibson on vocals, Andrew Winton on guitar, Iris, a wonderful 6-piece a Capella group, and Greg and Joe on rhythm. Blue Sky was recorded by Lee Buddle at Crank Recording Studios.

Paul also had a long interest in, and commitment to, traditional and contemporary gospel music, and his music is known and sung nationally and internationally. Many of Paul’s songs incorporate themes of social justice and explore why it’s still worth getting up in the morning.

Paul's music has been featured on Radio National’s various music programs, including The Daily and Weekend Planets, Life Matters and the Inside Sleeve, as well as on community radio stations.

In 2019 Paul died after a long battle with lymphoma. He played and raised the roof off at gigs right up until the end, and now his music lives fiercely on through his recordings.
Last edited 23rd April, 2019. Images © Copyright Ken Maley, Gary McGhee, Paul Gioia and Andrew Gioia, used with permission.